Learn about our testing services:

Cannabinoids are the terpeno-phenolic compounds unique to Cannabis that give the herb its multitude of medicinal properties. Cannabinoids are odourless and flavourless compounds located in the trichomes of leaves and mature flowers. It is the terpenes that give the plant aroma and flavour. There are many (over 100 discovered) different cannabinoids found in various quantities in different strains of Cannabis. The variations of cannabinoids and terpenes present in a given strain gives that strain its unique effect, taste and smell.

The most abundant cannabinoids, and their carboxylic acids, known to have medicinal properties, are tested for in our laboratory. Our professional lab technician uses High Pressure (Performance) Liquid Chromatography (HPLC) technology to detect and quantify specific cannabinoids using known analytical standards.

The process begins with a dry-weight determination of the cannabis sample, then cannabinoid extraction into a solvent using sonication and centrifugation and finally injection into the HPLC. The resulting graph is compared to known cannabinoid standard solutions. 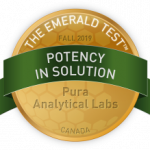 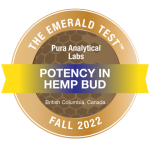 At Pura Analytical Labs, our current methods allow us to detect and quantify the following cannabinoids:

THC is the primary psychoactive component of the cannabis plant and has been studied the most of all cannabioids for medicinal qualities. For example, THC may ease moderate pain,  be antiemetic (anti-nausea) and antispastic (beneficial for MS and other spasm related disorders).  The carboxylic acid form of THC does not posess any psychoactive properties, and has limited medicinal value, therefore must be decarboxylated (via heat and or oxidation) before use. THC exists as THC Acid in the natural plant, which is indicative of the total THC availeble once decarboxylated.

Delta-8-Tetrahydrocannabinol is chemically very similar to delta 9 THC and also psychoactive (but less so) and not abundant in natural cannabis products. It can occur in significant amounts when high heat is employed to produce distillates and some extracts.

Tetrahydrocannabivarin is a variant of tetrahydrocannabinol (THC) having a 3-carbon side chain instead of a 5-carbon chain on the molecule. This makes it produce very different effects from THC. This moderately psychoactive variant of THC may suppress appetite and aid in regulating blood sugar levels

Cannabidiol, an isomer of THC, is a non- psychoactive cannabinoid with sedative, anti-anxiety and anti-psychotic qualities known to relieve convulsion, fight inflammation, ease nausea, and may even inhibit the growth of some types of cancer cells. CBD extracts have shown a lot of promise in patients with epilepsy. The acid form is less potent and must be heated or oxidated to achieve the active form.

Cannabidivarin is an isomer of CBD with similar chemical structure to CBD with 2 less carbons on the carbon chain. CBV has anti- convulsive and anti-epilectic proporties.

Cannabigerol is the precursor cannabinoid to all cannabinoids. The amount of CBG may indicate the maturity of the product. Some studies suggest CBG may posess anti-inflamatory properties.

Cannabinol is a cannabinoid derived from the degradation of THC over time and, when properly measured, can help determine both the freshness of samples and their level of psycho-activity. CBN offers a mild sedative effect for patients with various degrees of insomnia.

Cannabichromene (CBC & CBC-Acid) is a lesser-known cannabinoid found in low concentrations but may show promise in mood elevation (anti-depressant), as well as inflammatory properties and pain relief.

Delta 10 and other delta variants of THC occur regularly in distillates. We can identify and quantify delta 10 isomers in distillate.

Herbal drugs including medicinal/recreational cannabis must be free from toxic bacterial and fungal contamination in order to be an effective medicine for obvious reasons.

Results can be available in 24 hours. 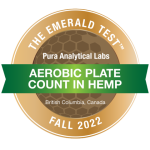 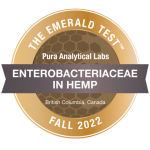 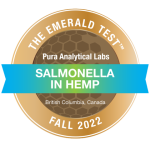 Exposure to residual pesticides and plant growth regulators in cannabis can be detrimental, as some pesticides can be converted to more harmful substances when combusted. In addition, pesticide residues can become concentrated in cannabis extracts. We employ the Perkin Elmer Q-Site 420 Dual Ion Source LC TQ-MSTM to screen for all of Health Canada’s banned pesticides and PGRs: 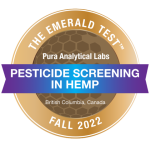 Solvents left behind after extraction can be hazardous in high quantities.

Our solvent screen compares your results to the maximum allowable limits per gram of extract set by Health Canada. We employ the Perkin Elmer TurbomatrixTM Headspace GC-FID for these tests.

We test for the following residual solvents. All solvents noted are classed for Cannabis Oiland have a limit of 5000 ppm (parts per million):

Using GC-FID, we screen for 35+ terpenes commonly found in cannabis. Terpenes are responsible for the unique aroma and flavour characteristics of each strain. Many have synergistic effects with cannabinoids and other health benefits.

We employ the Perkin Elmer TurbomatrixTM Headspace GC-FID for these tests.

Myrcene is the most prevalent terpene and is found in most varieties of of cannabis. Myrcene concentration dictates whether a strain will have an Indica or Sativa effect. Strains containing over 0.5% of myrcene produce a more sedative high, while strains containing less than 0.5% of myrcene have an energizing effect. Myrcene is also present in thyme, hops, lemongrass and citrus, and is used in aromatherapy.

α Pinene accounts for cannabis’ familiar odour, often associated with pine trees and turpentine. α Pinene is the most common naturally occurring terpenoid and acts as both an anti-inflammatory and a bronchodilator.

Linalool has a floral scent reminiscent of spring flowers, but with spicy overtones. it possesses sedative properties and is an effective anxiety and stress reliever. It has also been used as an analgesic and anti-epileptic.

Limonene is a dominant terpene in strains with a pronounced Sativa effect. It is also found in the rinds of citrus fruits. Limonene aids in the absorption of other terpenes through the skin and mucous membranes, and has been used to treat anxiety and depression.

Ociemene is frequently used in perfumes for its pleasant odour. In nature, this terpene contributes to a plant’s defences and possess anti-fungal properties.

Terpinolene has been shown to exhibit antioxidant and anti-cancer effects in rat brain cells. Studies with mice show that terpinolene has a sedative effect when inhaled. In addition, terpinolene is responsible for many of the floral notes found in Jack Herer varieties.

Terpineol is known for its pleasant smell and is often used in soaps and perfumes. It is known to have relaxing effects.

Valencene is present in Valencia oranges and contributes to cannabis’ citrus aroma.

β Caryophyllene is the only terpene known to interact with the body’s endocannabinoid system (CB2). It produces anti-inflammatory and analgesic effects.

Geraniol, also present in geraniums, emits a rosey scent that makes it a popular additive. It is an effective mosquito repellent and shows a potential protective effect agains neuropathy.

Humulene contributes to the “hoppy” aroma of cannabis. This terpene acts as an appetite suppressant and exhibits potent anti-inflammatory activity.

Phellandrene is commonly found in the essential oil of plants in the eucalyptus genus. Its smell is reminiscent of peppermint , with a slight citrus tone. Recent research shoes that phellandrene possesses anti-depressive effects.

Carene has a sweet, pungent odour and is a main constituent of pine and cedar resin. It is used to dry out excess body fluids, such as tears, mucous and sweat.

Terpinene is used as a fragrant additive in both the cosmetic and food industries. It is also considered to be a well-tolerated additive in the pharmaceutical industry, It has very strong antioxidant properties.

Fenchol is found in basil and is used extensively in perfumery. It is known to exhibit antibacterial properties.

Borneol has a menthol aroma and is used as a calmin sedarive. It is also beneficial for combating fatigue and recovering from stress or illness. Borneol exhibits both anti-inflammatory and anti-nociceptive effects.

Bisabolol is the primary constituent of German chamomile essential oil and has recently been shown to induce apoptosis in models of leukemia.

Phytol, found in green tea, is a diterpene that results from the degradation of chlorophyll. Phytol inhibits the enzyme that degrades the neurotransmitter GABA, which may partially account for its relaxing effects.

Camphene is found in essential oils extracted from certain trees. It has recently shown promise for pain relief and antioxidant effects.

Sabinene is known for its spicy, old and black pepper accents. It has been shown to benefit liver function and digestion, relieve arthritis and can soothe skin conditions.

Camphor, principally derived from the camphor tree, is readily absorbed through the skin. When applied topically, it produces a cooling sensation similar to that of menthol. Camphor also acts as a slight local anesthetic and an antimicrobial substance.

Isoborneol is found in mugwort that exhibits antiviral properties. It is a potent inhibitor of herpes simplex virus type 1.

Cedrene is present in the essential oil of cedar.

Nerolidol is found in oranges. It acts as a sedative and exhibits potent anti-fungal and anti-malarial activity.

Guaiol us an alcohol found in the oil of guaiacum and cypress pine. It possesses antimicrobial properties.

Isopulegol is a chemical precursor to menthol and has a variety of promising routes for therapeutic research. Studies have shown that isopulegol possess gastroprotective and anti-inflammatory effects and reduces the severity of seizures in animal models.

Geranyl Acetate is found in a variety of natural oils, derived from citronella, lemongrass, sassafras, roses and many others. It has a strong floral aroma with a fruity twist and exhibits strong antimicrobial effects.

Eucalyptol, derived from eucalyptus oil, has a minty, earthy aroma. It has been shown to possess potent anti-fungal effects.

Pulegone has a pleasant peppermint aroma and is a strong insecticide.

Select Vitamin E Acetate on our Analytical Request Form when you submit your sample.

The hop latent viroid (HLVd) is an infectious pathogen that causes disease in cannabis plants. It first came to the cannabis industry’s notice in California back in 2018. Now, the viroid has taken hold in Canada. The viroid can have a significant impact on a cannabis plant’s performance, and directly affect the value of subsequent harvests. We can screen for this single-stranded RNA virus via qPCR. Leaf samples or bud can be screened.

Psychedelic therapies are becoming increasingly popular, in particular psilocybin and psilocin containing mushroom therapies.
Accurate dosage of these compounds is paramount in gaining insights on the effectiveness of psychedelic treatments for various cognitive conditions.

Our validated methods using LC-MS/MS analysis include the quantification of psilocybin, psilocin and baeocystin of whole dried mushroom, extracts, capsule formulations and gummies.

Other analytical screening methods can include quantity/ purity of DMT and LSD.